Launched in early 2014, the peer-to-peer cryptocurrency Auroracoin (ᚠ) is promoted as an alternative to the Icelandic krona. It is named after aurora, the Latin name for the northern lights. The symbol ᚠ is a Nordic rune representing mobile wealth (as opposed to real estate and similar assets). Originally, it denoted cattle, sheep and similarly valuable domestic animals. 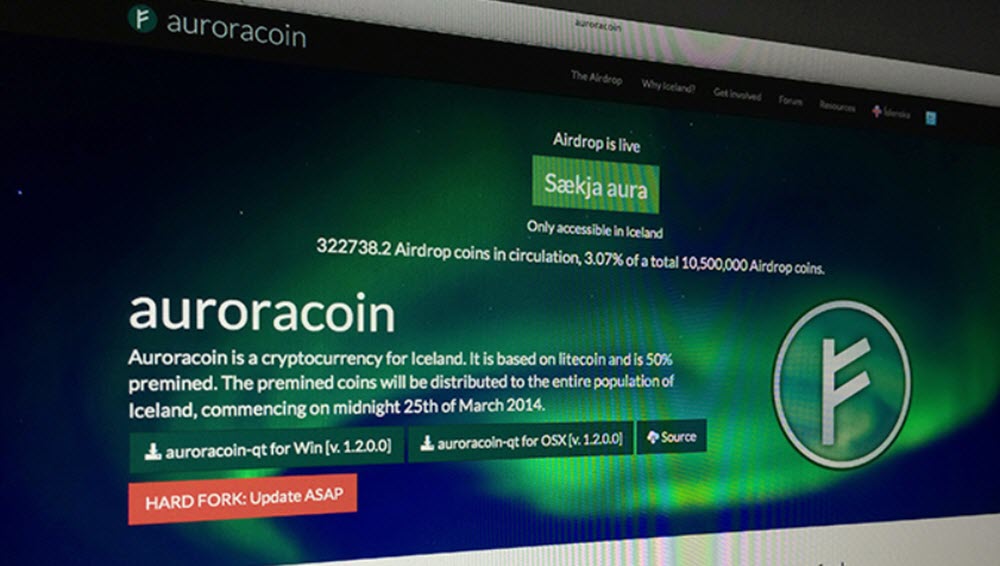 History of the Auroracoin

Among cryptocurrency experts, Iceland has often been touted as one an ideal country for cryptocurrency since the Icelandic population is already very used to paying most thing electronically instead of exchanging physical money.

Iceland is not a part of the Eurozone, but the Euro crisis had a strong impact on the country and this deepened the population´s interest in alternative currencies and transaction methods. (Similar trends were seen in many other parts of the world too.)

As a response to the financial crisis, strict capital controls were imposed on Iceland in 2008, and these were not lifted again until 2017. The restrictions were thus in place when the Auroacoin was launched in 2014.

The Auroacoin was launched in February 2014 by the pseudonym Baldur Friggjar Óðinsson, who announced that half of the created coins would be distributed for free to everyone listed in Iceland´s national ID database. At the time, that was roughly 330,000 people, which meant slightly more than 31 free Auroacoins for every person. <

The idea behind this free distribution of coins was to quickly form a large currency network. The distribution took place in three waves in 2014.

The second wave of distribution started right after the first, and continued until November 24. Since the auroacoin had dropped so much in value against the USD during the first wave, the Icelanders who got coins during the second wave were given 318 AUR each instead of 31.80 AUR.

The third wave of distribution started on the 25th of November in 2014 and continued until the 24th of March in 2015. Now, each recipient got 636 coins.

Were all the free coins accepted?

No, many eligible recipients never claimed their Auroacoins. When the third wave of distribution ended in March 2015, a total of 5,344,628 Auroacoins were left because their intended recipients had not claimed them. These unclaimed coins were “burned” on April 22 in accordance with the distribution plan, which meant that they were made inaccessible. The technique used to render them inaccessible was to send them to the address AURburnAURburnAURburnAURburn7eS4Rf.